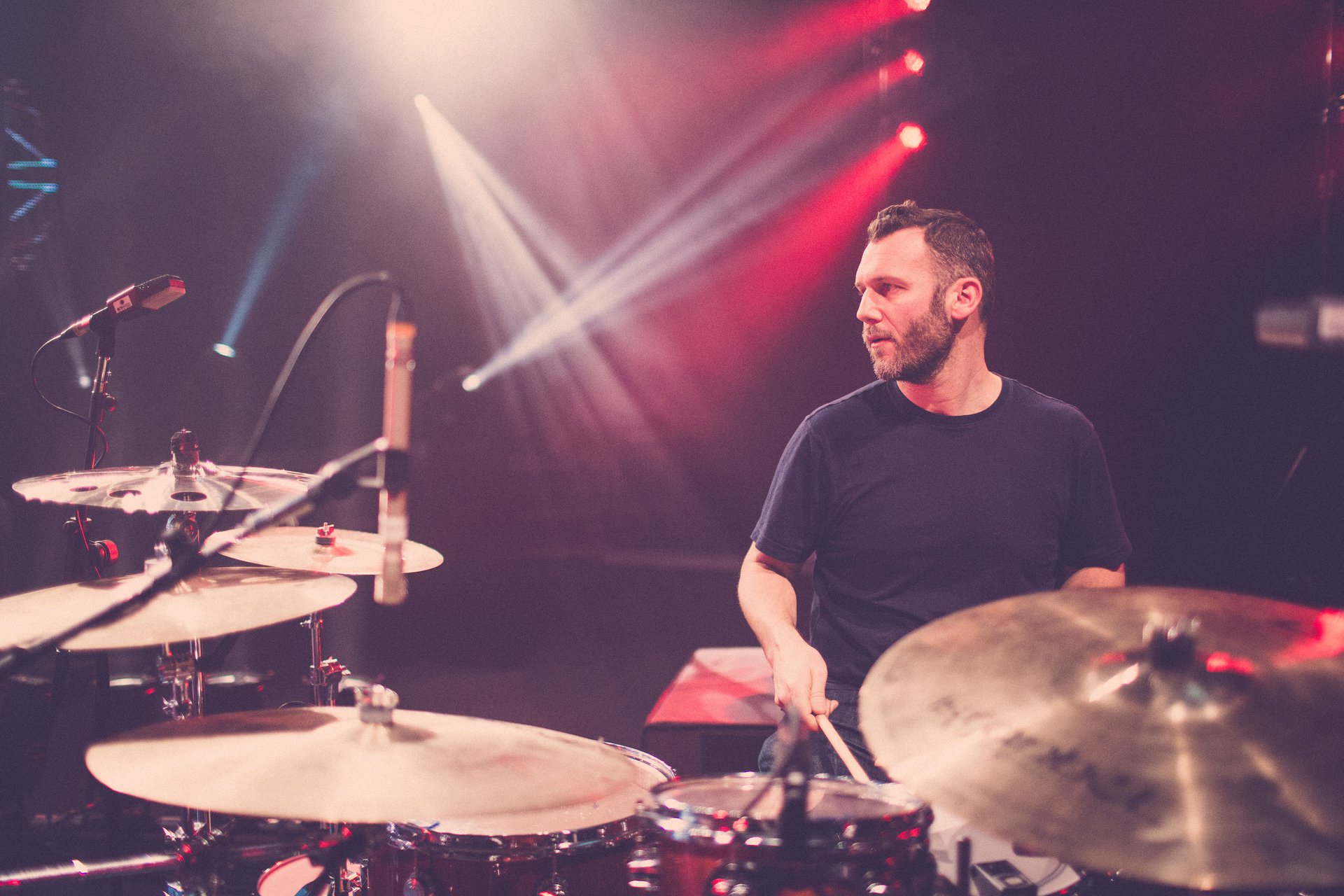 An Interview with Jack Baker

Jack Baker is a percussive force to be reckoned with. From performing on the drums with Bonobo for nearly 15 years, to running his own studio; he’s no stranger to hard work and honing his craft. We caught up with Jack to explore his unique perspective on drumming, sound design and recently recording at the infamous Abbey Road Studios.

Q. Hey Jack, thank you very much for joining us. Can you start off by telling us a bit about yourself and your career to date?

Hi guys, thanks for inviting me to answer some questions.  Like most musicians, I love to talk about myself!

I’m a drummer based in North London, UK and I’m a proud London boy who has grown up enriched by the music scene over here.

In the beginning, I started off as a young kid playing the drums in bands where everyone was older than me, learning the ropes from experienced professionals. At that time, I also had a passion for hip hop and jazz, so I bought an Akai MPC2000 and started sampling obscure jazz records (like the rest of the world).

Currently, I play drums for Bonobo and have been for many years now. We’ve been touring and recording together since 2004 and we have had the pleasure of seeing the world and all its wonders. Traveling and playing music was always my dream as a kid so the bucket list is getting ticked off.

Alongside Bonobo, I’ve toured and recorded heavily with singer Alice Russell since 2004. Alice is a true legend and pleasure to watch every time. I’ve worked with many bands and projects but the Bonobo and Alice Russell bands have kept me in and out of trouble.

I’m also a producer and have released and toured my own records, but at the moment I’m off tour and getting stuck into film scores (which I love). Putting music to picture is my true passion right now. You don't see as much daylight but it’s so much fun creating tracks in my recording studio.

Q. You’re consistently praised for your memorable performances whilst on tour with Bonobo. How did you end up being initially involved in the project, and how have things changed since you started?

Well, that’s very kind of you. Initially, I met Simon Green (aka Bonobo) in Brighton (we both studied the same course but at different times) and we had a mutual friend who introduced us. Simon was talking about putting a band together, so I jumped at the chance of being involved.

It was a different vibe back then, no private jets or groupies (sadly, it’s still not like that - one day)! We started playing the bar and club scene around the UK and Europe, trying to win people over and making some good friends and followers along the way. We all put a ton of effort into making the shows impressive and I used to come off stage a broken man every night. I had a saying that if you hadn’t sweated to your pants then you haven’t given it 100%.

The band's clientele has changed a few times over the years.  We started off with Cello, Sax, Drums, Simon on double Bass and our mate, Andy, at the back triggering samples on an MPC. Everything was much jazzier and free with only a few tracks with click tracks. There was plenty of space to improvise and everyone had their time to shine on stage.

Everyone used to switch around instruments and climb around the stage but as time went on we stripped everything back and became a more fluid unit. Now, we are rolling with such a large crew and playing such huge arenas but the vibe is still incredibly rewarding.

Q. With a background in drumming, production, musical direction, songwriting and bandleading (to name a few) - it’s clear that you’re very passionate about music and performing live. What is it that keeps pulling you back to these different areas of music and audio?

I try never to look back and only look to the future.

Randomly, I feel like I still have a lifetime of work still to offer and it frustrates me that I haven’t got the time to produce the music I want. In my eyes, you’re only as good as your last show, so I stay hungry for more opportunities.

I like working within the many aspects of the music industry.  Playing the drums is great but it is hard to make enough money to live (especially in London). I spend a long time traveling, so when I’m off tour, I love nothing better than going to my studio to write for a film or produce for an artist.   It’s a passion that I would love to give up one day because it drives me mad at the same time as enriching my life.

In today’s social media world it’s very easy to compare and compete with everyone around you. I see my peers doing incredible work online which inspires me to keep working and get better at what I do.

Q. As a drummer, do you think this lends a unique perspective to writing or producing?

I like to think people come to me because I’m known for producing rhythmic inspired tracks and people like that direction.

However, I hear producers with no rhythmic talent, produce beats that no drummer would think of, so I’m not sure if “knowing how to play drums” is a bonus or a hindrance.

Q. A lot of artists that we talk to have a specific sample or production technique that they like to incorporate subtly across their works. What’s your “Wilhelm Scream” of sounds/techniques? Do have a consistent one that you like to slip consistently into different tracks?

I spend a lot of my time beatboxing into my phone and beat replacing in Logic or Ableton because I find it hard to get the exact swing using the quantize functions in most DAW’s. I miss the “in-front and behind the beat” function on an MPC, so I spend ages trying to make my hits sit in the right place. Pushing and pulling is very important to me.

I tend to start a track with a programmed kick and hand clap then I build from there with live percussion until I have a groove that feels good. From there, I move onto other instruments.

One thing that I have noticed recently, is that I have never programmed a beat using a real snare drum sound. It makes me cringe when I use a snare sample.

Even if it’s been recorded incredibly well, it just sounds flat.  I would much rather use a finger snap or a hand clap. A while back, I recorded some hand claps at Greenmount Studio up in Leeds. I use them on everything, they sound so good.

Q. You’ve recently been recording with the Killer Horns at Abbey Road Studios - can you tell us a bit more about the project? What else can we expect to see you putting out this year?

I’ve worked with the Killer Horns a lot over the years but that Abbey Road session was a special one. Myself and Ryan Jacob (along with Mike from the Killer Horns) have recently been writing some library music, specialising in cinematic drums and horns. It was such an honor to record it at Abbey Road, that place is crazy!

This is looking like a busy year with a couple of interesting projects underway (which I will keep under my hat for now). Myself, Mike Lesirge and Johnny Tomlinson (from Bonobo) have started a side project and we will be releasing some music later in the year, hopefully with a few festival shows too.

I’m also playing a few shows with a project called Planet Battagon from On the Corner Records. It’s some crazy electronic free jazz that’s kind of hard to listen to, but great fun to play.

If you’re interested in checking out my new projects, my website is a good place to visit.

Q. Since you’ve acquired Zone, how have you been using it within your work flow?

I’ve been using Zone mostly for sound design work as it’s a monster at creating unusual textures. I’ve found a few sounds on there that just fit with ease into tracks that I’m working on.

Zone seems quite organic and can be pretty subtle if you want it to be. It’s really quick to manipulate sounds and you can lose yourself with the sequencing functions.

Q. When you’re sitting down to create a new patch, can you step us through your usual process? Do you experiment with sounds, or do you have a clear idea of what you want before you begin?

Usually, I will know the sound I want before I open Zone.  I might start by using the presets, but will soon move away from the sound by manipulating it. I will continue to mess around with the sequencer presets and the filter until I have something that works in the track – and then I can really start messing around with delays and reverbs.

Q. Do you have any favourite presets?

The Reversed String is pretty special, especially on the percussive filter setting; it’s got horror soundtracks written all over it. I’m actually using it as we speak! It’s huge!

Q. And finally, what’s one piece of advice that you wish you were given when you started out in the [Music] Industry?

Make sure that you know how the Music Industry works and know what direction you want to go in. A varied life is a great place to be, but is a lot harder to make money. Get good at one thing and stick to it for a while.

Keep music simple; if a track is not working then chuck it in the bin. You can lose hours of your life working on tracks that aren’t amazing instead of just starting a new one.

Challenging yourself is great but also try and work out who you are and what you want to say. It’s actually pretty hard to do this, it take a lot of guts to reach the point where you are working to your strengths. I’m sure there’s a lot of people that want to write cool electronic music but their strength is Children’s TV theme music.  Stick to what you are good at.

And also, make sure you see daylight! So much of my life is indoors, you can turn into a vampire!